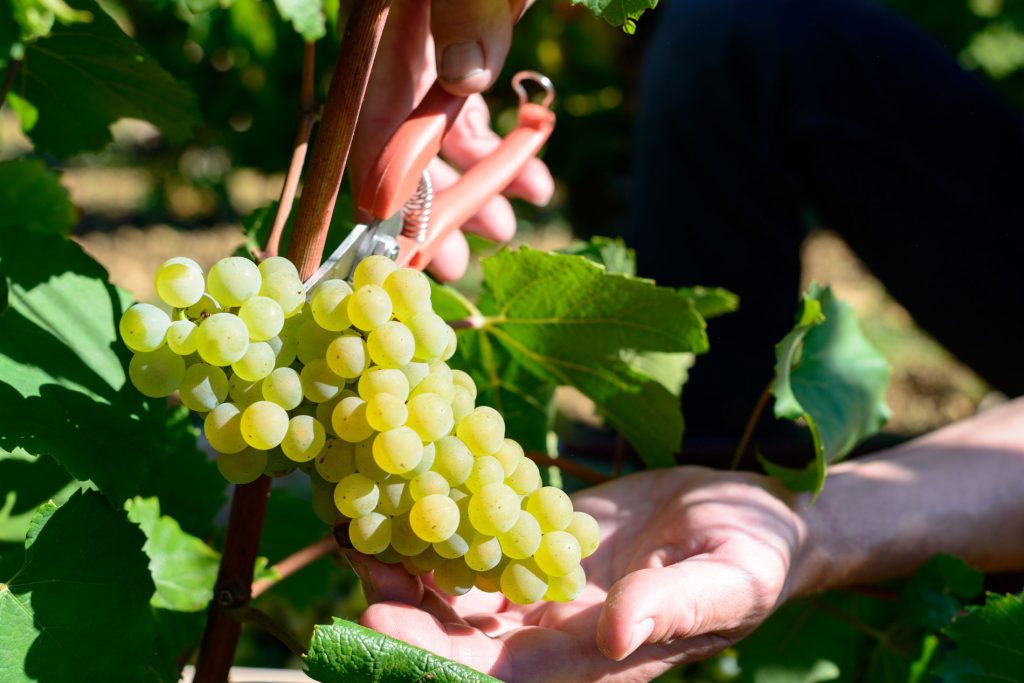 discover
Château de Meursault, one of the largest estates in Burgundy, produces as many red wines as white wines, made respectively from the Pinot Noir and Chardonnay grapes. The 35 appellations including 18 Premiers Crus and 4 Grands Crus all come from our own vines in organic conversion. In 2018, we reduced the weight of the bottle by 15% while preserving the originality of the model designed in the 18th century.

After mild autumn and winter, with more water than normal (+90 mm), the vine showed its first signs of recovery in mid-March. 2020 promises to be a record of  earliness because over 6 months (October to March) we had the coldest temperature at -5° C (only during one day). Excessive rainfall during the winter allowed us to replenish the soil’s water reserves.

Despite a cool beginning of April 2020, it is the fastest starting vintage over the last 25 years. With strong sunshine and temperatures that reached more than 24° C in mid-April, the vegetation started to exploded. The buds had to be removed in a hurry because they quickly get tranformed into leaves. By april 20, we already noted 6 leaves spread out on chardonnay and 4 leaves spread out on pinot noir. On april 21, we were 24 days in advance compared with the 2019 vintage.

In May, the growth dynamic was intense (2 leaves per week). the disbudding  was barely finished when the tying-up started in Meursault Perrières and Pommard Clos des Epenot. On the estate, we demanded our winegrowers a precise work of disbudding in order to control the yields and the quality of the future harvest. The first flowers appeared around May 16 and by May 25.

At the same time, the diseases (powdery mildew and mildew) were not very present. We had to pay attention and closely monitor our plots. At the beginning of June, despite more disturbed weather, the climatic conditions were favorable to a dazzling nouaison. In less than a week, the berries reached 5 mm and we could  already  plan the harvests on August 20th.

On July 5th, the Chamber of Agriculture informed us that the 2020 vintage is the earliest ever recorded and gave us the weather forecast for the up-coming vintage. July and August were marked by very hot, sunny, and dry  weather which helped us to maintain a perfect sanitary state. The drought began to affect some pinot noir plots. On July 10, we saw the first pinot noir berry turning red. On July 20, the veraison started in  all the sectors. As a result, we actively started to prepare the vat room,  while the harvest  was approaching….

I would like to receive wine suggestions from Château de Meursault

Do not miss our latest news

To keep you informed of our news, we invite you to subscribe to our newsletter. To do this, all you have to do is provide us with your email address and the language in which you wish to receive our newsletter (French or English).

Alcohol abuse is dangerous for your health. Please drink responsibly.

A problem was detected in the following Form. Submitting it could result in errors. Please contact the site administrator.

A problem was detected in the following Form. Submitting it could result in errors. Please contact the site administrator.

I book my "WINE AUCTION" tour

To visit this site, you must be of legal drinking age in your country of residence. By clicking on “I am of legal age”, you accept the terms and conditions of use of this site.

Hover over the map to zoom

I would like a gift voucher for the "GRANDS TERROIRS" tour

I book my "GRANDS TERROIRS" tour

I book my "EXCLUSIVE" tour

I would like a gift voucher for the "EXCLUSIVE" tour

Nous utilisons des cookies pour vous garantir la meilleure expérience sur notre site web. Si vous continuez à utiliser ce site, nous supposerons que vous en êtes satisfait.
We use cookies to ensure you get the best experience on our website. If you continue to use this site we will assume that you are happy with it.OKPolitique de confidentialité